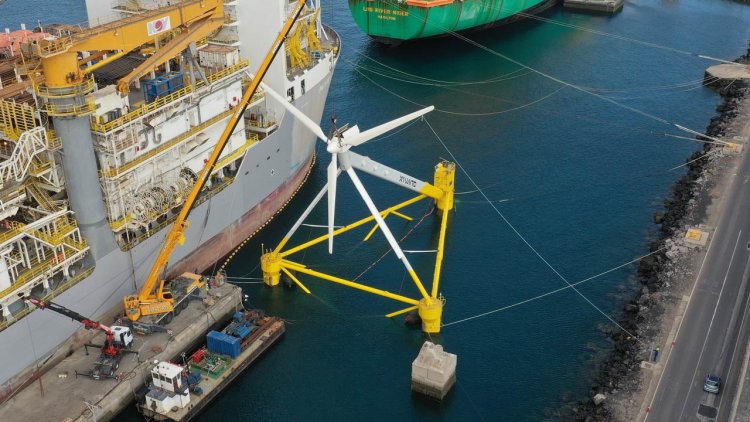 Fitted with a specially adapted V29 Vestas turbine, the unique ‘downwind’ system is able to ‘weathervane’ and orientate passively with the wind to maximise energy yields.

The novel ‘tripod-like’ platform also features greater structural efficiency, with a lighter and more scalable design, while minimising environmental impact on the ocean.

“The rotor assembly represents a symbolic moment in this project, fitting the blades which will ultimately harness the wind and demonstrate our downwind design. Strong summer trade winds in Gran Canaria brought minor delays after the initial load-out, but this exciting period brings the assembly process to fruition. In the coming weeks, we will engage in cable and anchor installations before the platform is stationed at a 50m water depth for final commissioning.

From the outset, X1 Wind has been committed to find a more efficient structural approach for floating wind compared to more traditional systems. We believe we have now developed the technology to take full advantage of the marine environment, while respecting the future sustainability of the ocean. Our system will drive greater structural efficiency, reducing loads, especially the bending moments at the base of the tower, allowing for a lighter design.”

X1 Wind says that its platform utilizes the best features of a semi-submersible – with a low draft – and the ability to reach deeper waters by a Tension Leg Platform (TLP) mooring system – with a small seabed footprint. 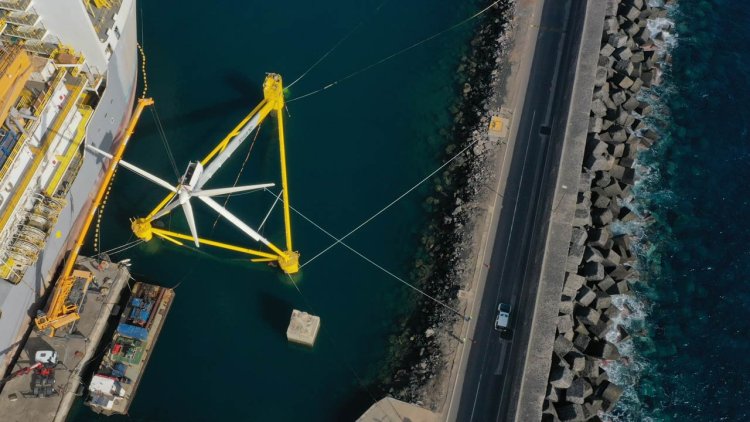 “With 100m plus blades becoming more prevalent in offshore environments, significant measures are needed to avoid tower strikes. This typically involves increasing the distance between the blades and tower applying a tilt and cone angle, and designing more costly pre-bent and stiffer blades, which also makes them heavier.

However, these measures come with increased manufacturing complexity, cost and potential loss of power generation. Using a downwind configuration reduces the risk of tower strikes, opening up the possibility of using lighter, more flexible and therefore cheaper large-scale wind turbine designs. These are key characteristics which will enable the development of future ‘extreme-scale’ downwind structures with research already being conducted on 200m blades and 50MW power ratings.”

Supported by €4million from the European Commission H2020 Program, PivotBuoy aims to substantially reduce the current Levelized Cost Of Electricity (LCOE) of floating wind. Key advantages of the PivotBuoy system include a reduced floater weight, faster and cheaper installation processes and the ability to reach deeper waters with minimal seabed footprint thanks to the TLP mooring system. 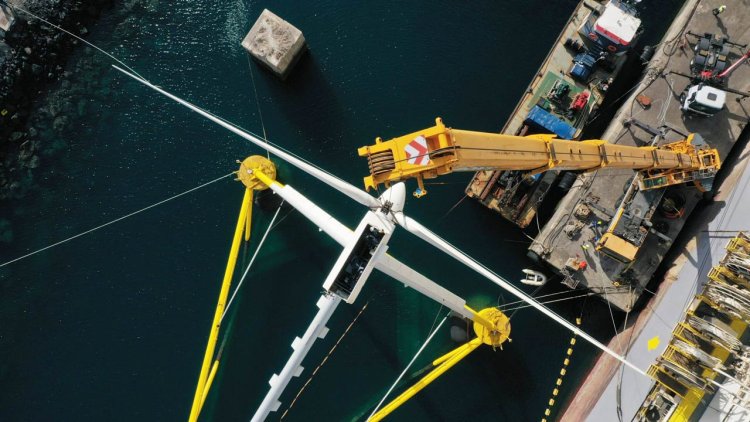 Total acquired a stake in the pioneering floating wind...

Parkwind selects Port of Mukran to become the O&M base...