Launch of the second of three patrol vessels ordered by Senegal

The launch of the ‘NIANI’, the second offshore patrol vessel destined for the Senegalese Navy, took place in Concarneau. 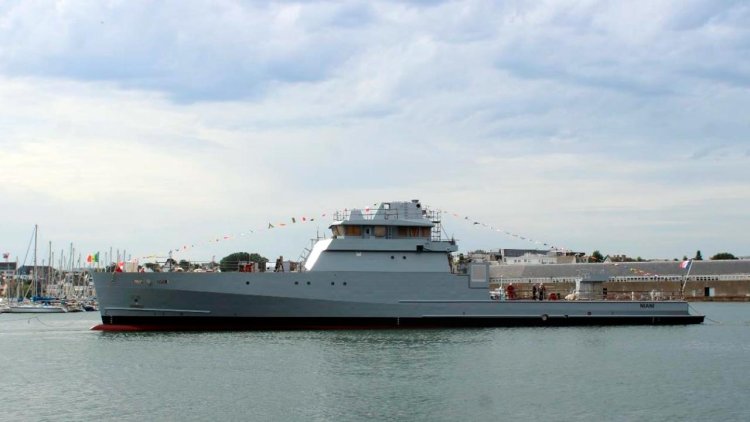 This stage marks a significant step in the progress of the programme for the supply of three offshore patrol vessels.

In parallel, the first unit is in the outfitting phase before the start of its sea trials, and outfitting is also ongoing on the third vessel in preparation for launch.

This contract was signed in November 2019 by Senegal’s Ministry of Armed Forces and PIRIOU group.

Built with the support and expertise of its partner company KERSHIP, the programme of construction of these three patrol vessels is spread over a period of 44 months, until summer 2024. It also includes a support period lasting several years in Senegal.

"It is an important event for this boat but also more broadly for the OPV58S programme! Thanks to the motivation of the PIRIOU and KERSHIP personnel and the continuous working partnership with the representatives of the Senegalese Naval Staff, we are progressing according to schedule."

The OPV 58 S (Offshore Patrol Vessel) is a robust 62 m patrol vessel with outstanding versatility and high endurance. The OPV 58 S is dedicated to missions such as surveillance, identification and intervention, and fulfils the entire range of missions related to law enforcement. In addition to her deployment ability -intervention RHIBs- she possesses a first rank deterrence capacity thanks to her anti-surface and anti-aircraft weapon systems.

These OPVs will be equipped with MARTE MK2/N anti-ship missiles. With the ability to strike at ranges in excess of 30 kilometres and their fire-and-forget capability, these missiles will provide the means to the Senegalese Navy to enforce their maritime superiority. The vessels will also benefit from the SIMBAD-RC system and its MISTRAL missiles- this combination providing an extremely effective defence capability against all threats including anti-ship missiles, combat aircraft, UAVs, helicopters, as well as small surface threats such as those presented by FIACs. These missiles and missile systems are designed and produced by MBDA.

Fincantieri: Dry dock works start on the LPD for Qatar...

New station for the Naval Guard Division opened in Ukraine